The Rhodes Scholarship is the oldest (first awarded in 1902) international scholarship programme, enabling outstanding young people from around the world to study at the University of Oxford.

The application process is explained as you navigate through the pages outlined in the navigation below.

Canadians are generally proud of our multicultural heritage. As a Chinese-Canadian and an Indian-Canadian, the authors of this article are no exception. We believe that Canadian Rhodes Scholars at Oxford should not only be made up of great people, but should also reflect Canada’s actual population diversity. The ratio of Caucasians to minorities in the Canadian population is roughly 3:1. Accordingly, we happily noted the diverse makeup of the 2016 Canadian Scholar cohort, especially as it includes one of the first aboriginal Rhodes Scholars from Canada.

But how can we help ensure that future Canadian Rhodes Scholar cohorts remain consistent with our population diversity?

Answering this question demands a frank discussion of privilege. Traditionally, Canadian Rhodes recipients - who are of course deserving of their selection - have been students from relatively privileged backgrounds. These applicants tend to possess more “social capital”: well-positioned family, friends, and other connections knowledgeable about the Rhodes Scholarship and willing to help.

Now let’s consider students with less social capital. Unfortunately, these students tend to come from aboriginal or minority-immigrant communities. No matter how talented or hard-working these students are, they may not have even heard of opportunities like the Rhodes Scholarship. On reading about it, they may even find themselves intimidated by its “elite” status. If they apply, they will be required to produce at least six letters of reference - and whereas one or two may be obtainable, they may wonder who they can possibly ask for the last four. Travelling to the interview would mean paying for flights and accommodations themselves. Additionally, taking two to three years out of one’s income-generating lifetime to pursue further education may be difficult to fathom for these students, as many grew up in families where income is essential to survival, where they are expected to be stable wage-earners in support of their own families.

For these less privileged students, is it worth their while to pursue such a resource-intensive process? Perhaps not. So much for diversity amongst Canadian Rhodes Scholars.

This article’s authors, an Indian-Canadian and a Chinese-Canadian, are both current Rhodes Scholars - despite the many barriers presented above. We both immigrated to Canada as kids, led by our parents’ desire for a better life, and their hopes for a better future for ourselves. Being the first in our families to navigate Canadian post-secondary education, we (like many other immigrants) struggled to even discover scholarship opportunities, let alone succeed. Imagine our delight (and surprise) when we were both chosen as 2014 Canadian Rhodes Scholars.

From our experience, and the combined experiences of all minority Canadian Rhodes Scholars, it’s clear that underprivileged students have the potential for success in academia and beyond. They should recognize this potential, and seize it. The question now is how: how can such students can best navigate competitive processes like the Rhodes application despite larger barriers in their way? We have three suggestions.

First, social capital isn’t elusive or exclusive. The connections and resources that seem to magically guide some students - they can be available for all. Even without family connections, underprivileged students have access to knowledgeable counselors and inspiring teachers in Canadian high-schools and universities. Rhodes referees don’t need to be famous or have highly prestigious careers. Some of our referees, for instance, were high school teachers, who we’ve known for many years. In general, do reach out to anyone who inspire you and who believe in you. Their help will be invaluable - not just for the Rhodes, but also for life.

Asking for help, though, can sometimes be daunting for students from underprivileged, minority backgrounds. Such students often consider scholarships like the Rhodes to be restricted to people not like them, and therefore outside their realm of possibility. To such students, please know that many less qualified (but more privileged) students are applying for the scholarships you are not (they will likely not win, but they are applying nonetheless). Years of positive reinforcement from their social capital has helped them pass the so-called “poshness tests” of elite institutions. But know that you, as an underprivileged student, have your own distinguishing strengths: the resilience that you’ve built navigating economic or cultural barriers, the stick-to-itiveness that you’ve shown in your educational trajectory despite juggling part-time jobs or familial responsibilities. This is true “physical vigor”: a hallmark Rhodes criterion that used to myopically favor varsity sport. So our second suggestion is simply to recognize your unique qualifications, and definitely apply.

It’s hard to be self-confident, however, when rumors abound about how the imperialist history of the Rhodes Scholarship disadvantages underprivileged, minority students from the start. But our third point is for applicants to know that, whatever Cecil Rhodes intended in his will, the Rhodes Scholarships have changed to become ever-more inclusive. The 2016 Canadian Scholar cohort is just one example. Rhodes selection committees now value the experiences of students from all backgrounds and ethnicities. Applicants would be well-advised to forget about rumors of implicit biases in the selection system. Instead, applicants should view the application process as a challenge, and freely advocate for what they believe in. 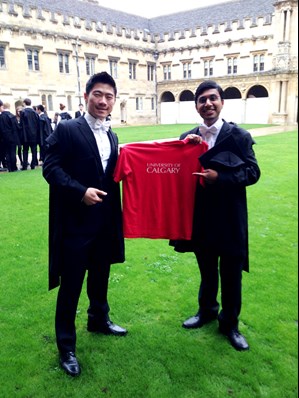 Dr. Yan Yu (Prairies & St John's 2014) and Dr. Aravind Ganesh (Prairies & St John's 2014) were graduates of the Faculty of Medicine at the University of Calgary, and are currently pursuing post-graduate education at the University of Oxford on Rhodes Scholarships. They will return to Calgary to practice medicine upon the conclusion of their studies. Correspondence should be addressed to Yan - he can be reached via his website or on Twitter: @yanyu247.