Welcoming the class of 2010, Don Markwell, the then Warden of Rhodes House, remarked that winning a Rhodes Scholarship is not a confirmation that one possesses the core values on which Rhodes Scholars are chosen – outstanding intellect, character, leadership, and commitment to service – but a lifelong challenge that emboldens the recipient to develop, express and uphold them. Don’s words rang through my mind at the recent unveiling of the portrait of Lucy Banda-Sichone (Zambia & Somerville 1978), the first female Rhodes Scholar to have her picture hung in the prestigious Rhodes House. As I listened to the speeches in celebration of Lucy’s short but impactful life (1955-1998), it occurred to me that they were a fitting tribute to a person who embodied the ideals of the Scholarship and had met the challenge that Don had spoken of five years earlier.

Lucy left Oxford armed with one of its most coveted qualifications, the degree of Philosophy, Politics and Economics, to return home in 1981. Earlier, she had earned a Bachelor of Laws from the University of Zambia. Her decision to overlook the lures of the developed world and return to a country whose economy was in serious decline distinguished her as a patriot. It demonstrated her conviction that the acquisition of specialist knowledge should result in its application to causes and communities that need it most. In the service of this belief, Lucy, once in Zambia, became a fierce advocate for social justice, human rights and institutional reform, driving the country’s policy direction. But it was her courage in a climate (1991-2001) that witnessed several state-linked assassinations of political adversaries that set her apart.

Facing real threat to her life, Lucy refused to be paralysed into inaction by fear and fiercely criticised the Zambian government. She became the most notable and influential voice in Zambian public life, finding expression in a weekly column – Lucy Sichone on Monday – published in The Post, the most widely read independent newspaper. Between 1993 and 1998, Lucy tackled wide-ranging issues affecting the country, including government excesses, corruption, state brutality, injustice and abuse of power. A thorn in the side of the ruling authorities, her writing inspired Zambians to take a critical stance on the country’s leadership. The column established Lucy as a tireless advocate for human dignity.

In her professional capacity as a lawyer, Lucy took on high-profile cases, defending citizens charged with treason and espionage. Responding to well-founded concerns that her speaking truth to power put her life at risk, she declared that ‘the freedoms enshrined in the Bill of Rights make it a sacred duty for me to defend them to the death’. Lucy challenged repressive legislation such as the Public Order Act, which required groups to get permission from the police for public meetings and had often been used to clamp down on political dissent. When the Supreme Court, in January 1996, struck down that specific provision as unconstitutional, Lucy hailed the judgement as one that ‘shall be forever cherished by all freedom and peace loving Zambians’. However, then Republican Vice-President Godfrey Miyanda and the Minister of Justice, Remy Mushota (Zambia & Exeter & University of Birmingham 1976), denounced the ruling, viciously attacked the judges as supporters of the opposition United National Independence Party (UNIP) – the nationalist movement that had ruled Zambia since independence in 1964 under the leadership of Kenneth Kaunda – and promised to table an amendment bill that would effectively restore the removed section.

In her weekly newspaper column, Lucy expressed her disgust at Miyanda, especially as his life had earlier been saved by one of the judges he was now condemning when he had been charged with treason by Kaunda’s government. Calling his position ‘hypocritical, false and cheap’, she likened Miyanda to former Nigerian autocrat Sani Abacha and chastised lawmakers who were pushing for the removal of the judges who had made the landmark judgment. Lucy further made mockery of the National Assembly Speaker’s regalia, relics of the colonial era, saying, ‘Miyanda could only make his cowardly statement and attack a decision made by men of (high) stature, dignity and integrity from [parliament,] behind the protective skirts of grandmother [Robinson] Nabulyato [the Speaker was in fact male]!’ So incensed by her scathing criticism were Miyanda, the Speaker and MPs that Parliament bestowed unto itself judicial powers and sentenced Lucy – alongside two editors from The Post – to indefinite imprisonment for alleged breach of parliamentary privileges, a sentence that the High Court later overturned. For Lucy, law, like power and leadership, was an instrument for service, not control.

When not confronting the state through words, Lucy did so physically. She once parked her vehicle across the road to block a government minister’s car in order to confront him over the plight of women who earned their living by crushing stones and whom the government was harassing on public health concerns. Lucy argued that the women’s trade represented the terminal state of the economy, which gave women few options for more sustainable livelihoods. She also pointed out the long-term social implications for the women’s children, who often accompanied their mothers as they worked long hours in the sun. But perhaps her most vivid and unforgettable act was her public confrontation with President Frederick Chiluba over his administration’s human rights violations.

On 23 August 1997, in a move that highlighted the government’s increasingly violent suppression of civil liberties, police opened fire on a mass rally called by the main opposition party, UNIP, nearly killing its leader and founding president of Zambia, Kaunda. Another opposition leader, Rodger Chongwe, needed emergency surgery after the same bullet that wounded Kaunda hit him. On Chiluba’s return from the Far East, where he had been when the shooting occurred, Lucy led a lone protest against the attempted assassination at the Lusaka International Airport, welcoming the President with a placard inscribed with the words ‘Welcome to Zambia, Our Own Sharpeville Massacre, 23rd August 1997, Kabwe [the town where the shooting took place]’.  Lucy’s placard compared the incident to one of the most violent periods in South Africa’s history when in 1960 police killed 69 black South Africans peacefully protesting against the excesses of the apartheid regime in the town of Sharpeville. When hundreds of ruling party supporters who had thronged the airport terminal attempted to physically assault her, Lucy retorted: ‘I came to welcome my President just like any other citizen. What is wrong with that?’ Police promptly bundled her away for allegedly ‘disturbing the peace’. 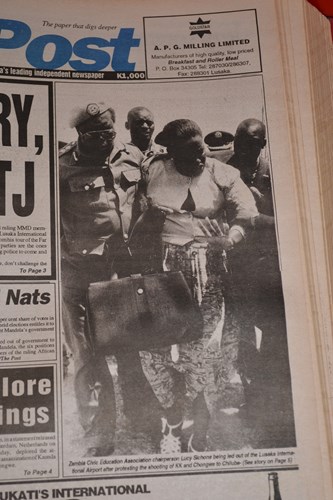 Lucy was also a strategist and visionary. She institutionalised the promotion of human rights and civic awareness by establishing the Zambia Civic Education Association, which, nearly two decades after her death, is still pursuing the goals of its founder. It is impossible to summarise her life as an activist, a politician and lawyer in a few words, but it was as if she knew that her life would be short and that she had to make every moment count. Although she neither sought nor occupied public office, Lucy constructively affected it through activism and a weekly newspaper column in a manner that embodied the very essence of public life: selfless service, capacity for effective leadership and moral force of character. For Lucy, an Oxford education was not prestige or a certificate to the accumulation of personal wealth, but a call to the practical expression of the ethical values on which the Rhodes Scholarship rests. She was a non-imposing figure with an imposing mind and remains, within a tradition of political and human rights activism and protest, Zambia’s foremost dissident since independence.

Sishuwa Sishuwa (Zambia & St Antony's 2010) read African Studies at Oxford before starting his DPhil which looks at ‘Populism and the Rise of Michael Sata in Zambia c.1962-2011’. He is a regular contributor to 'The Post' in Zambia and also writes about democracy in Africa.

ISSUES OF THE DAY | LEADERSHIP AND PUBLIC SERVICE