There was never any doubt that I would attend the 40 Years of Rhodes Women celebrations held in Oxford from 15-17 September 2017. The dates clashed with the Formula 1 Singapore Grand Prix (Forza Ferrari!) as well as a Fintech meeting in San Francisco that would have yielded useful contacts for my future entrepreneurial endeavours.

Yet I chose to come to Oxford as it gave me an opportunity to reconnect with my younger self and take stock of my journey to date. The anniversary is an acknowledgement of tremendous effort by the women’s movement that succeeded in the amendment of the gender clause stipulated in The Will, thus allowing women such as myself to apply for the most prestigious scholarship in the world.

The celebrations were certainly worth the trip. I spent three days interacting with women from different generations and backgrounds, having candid conversations on a variety of topics from office politics to having your first baby after the age of 40. I gained some useful insights and realised that Rhodes Women are more alike than not. My three main takeaways from the weekend were:

Have Rhodes women lived up to the vision?

It’s been 15 years since I was awarded the Rhodes scholarship and since that I have grappled with a question that Karen Stevenson (Maryland & DC & Magdalen 1979) posed at the start of the weekend: “Have Rhodes women lived up to the vision?”

Karen’s words of wisdom left me feeling inspired and at ease about how we measure our own success: “Don’t measure yourself by external standards… There is no such thing as a perfect woman. Everyone’s journey is worth respect.”

Living up to the expectations of being a Rhodes Scholar may feel like a burden. However, after hearing the different paths Rhodes women have taken, I was left feeling more confident and unapologetic about my choices

Standing up for the world

Anasuya Sengupta struck a chord when she said: “Too many women, in too many countries, speak the same language, of silence”. Sometimes the fear of being called ‘difficult’ or a ‘trouble maker’ trumps our courage of conviction. But when we do find that courage, boy do our stars shine bright.

Lucy Sichone (Zambia & Somerville 1978), the first female Zambian Rhodes Scholar, demonstrated such courage. Despite the constant threat of imprisonment, Lucy became a leading human rights activist and a ‘voice of conscience’ in a society where the government is not accustomed to being challenged. As a fellow Zambian I could not be more proud that Lucy Sichone became the first female Rhodes Scholar to have her portrait displayed in Milner Hall. Lucy reminds us that the first step to leaving a legacy is to hold true to your own values and beliefs. 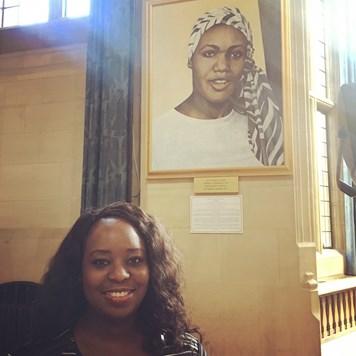 Muloongo next to the portrait of Lucy Sichone in Milner Hall, Rhodes House

As I stood in Milner Hall, I realised that I have developed a greater affinity and appreciation for the Rhodes Trust. The success of the Rhodes Trust is dependent on all of us rallying together to contribute in whatever way we can to ensure that generations to come enjoy the same privilege of being Rhodes Scholars and attending the great institution that is Oxford.