Early in August 2019, leading climate scientists and government officials from around the world gathered in Geneva to negotiate the “Summary for Policy Makers” of the Intergovernmental Panel for Climate Change (IPCC) Special Report on Land. The stakes were high – scientists sought to defend the academic integrity of the report; governments grappled with the implications of the findings for food production, energy systems and land-use. Observers, including Greta Thunberg and young activists from Lebanon, Mexico, Germany, called for more action. As a Lead Author for the report, I had the privilege of participating in these debates.

The final approval process of an IPCC report is like a week long PhD defence with governments as examiners and marathon thirty hour nonstop overnight sessions. Some governments are clearly working to make the final product better, suggesting clarifications to statements. Other governments try to slow down the negotiations, hoping that time will run out and sections of the report be eliminated. Yet others try to remove scientific statements that have inconvenient political implications. We began to refer to one negotiator as the “dentist” because “he kept drilling and drilling and wouldn’t stop when it hurt.”

Intergovernmental politics can play out in unexpected ways. Late on the last evening, the US objected to a sentence about risks at different levels of temperature increase. Delegates had already debated and approved this text in a breakout group, but it now seemed that further negotiations were needed. Suddenly France raised a point of order, reminding governments that they had agreed to abide by breakout group decisions. This wasn’t done to block the US but was intended for Saudi Arabia, which had arrived twenty minutes late to the breakout group and was threatening to veto text approved in its absence. Nevertheless, by reminding governments of pre-agreed rules, France saved us from having to water-down key statements on risk and secured extra hours of sleep for everyone.

Despite such politics, when the Summary for Policy Makers was finally approved both governments and scientists cheered. This was the culmination of a two-year process that brought together one hundred and seven scientists from fifty two countries. Our mandate was clear: assess the impacts of climate change on land and on food security and identify the role of land and food systems in climate change. Last year’s IPCC report, The Special Report on Global Warming of 1.5 Degrees, made clear that we will require land-based mitigation, such as bioenergy carbon capture and storage, to stay well-below two degrees of global warming. Our report shows that there are limits and risks associated with using land for bioenergy. In other words, land is part of the solution, but it can’t do it all.

Land is our critical lifeline. We rely on it for food, water, health and livelihoods. But it is struggling under the burden we are placing on it. Human use affects almost three-quarters of ice-free land and about one-quarter of land is now degraded! In 2015, some five hundred million people lived in areas undergoing desertification, an increase of approximately 300% since 1961. The temperature over land is rising at almost twice the global average rate, impacting human and natural ecosystems, including our ability to produce food.

At the same time, land affects the climate system. Between 2007 and 2016, 23% of human-caused greenhouse gas emissions resulted from agriculture, deforestation, and other land use. The food system also plays a key role in anthropogenic emissions. Currently, 25-30% of food produced is lost or wasted. Most of the food waste comes from households in the developed world, whereas food loss is experienced more in the developing world. If we reduce loss and waste, we can reduce greenhouse gas emissions and improve food security. Almost half (41%) of human-caused methane emissions come from ruminant livestock (cattle, buffalo, sheep and goats) and from paddy fields. Dietary changes can further reduce emissions. Indeed, as this became increasingly clear, many of the report’s authors stopped eating meat. During the opening reception for negotiations, hosted by the Swiss government, meat appetisers were left untouched. 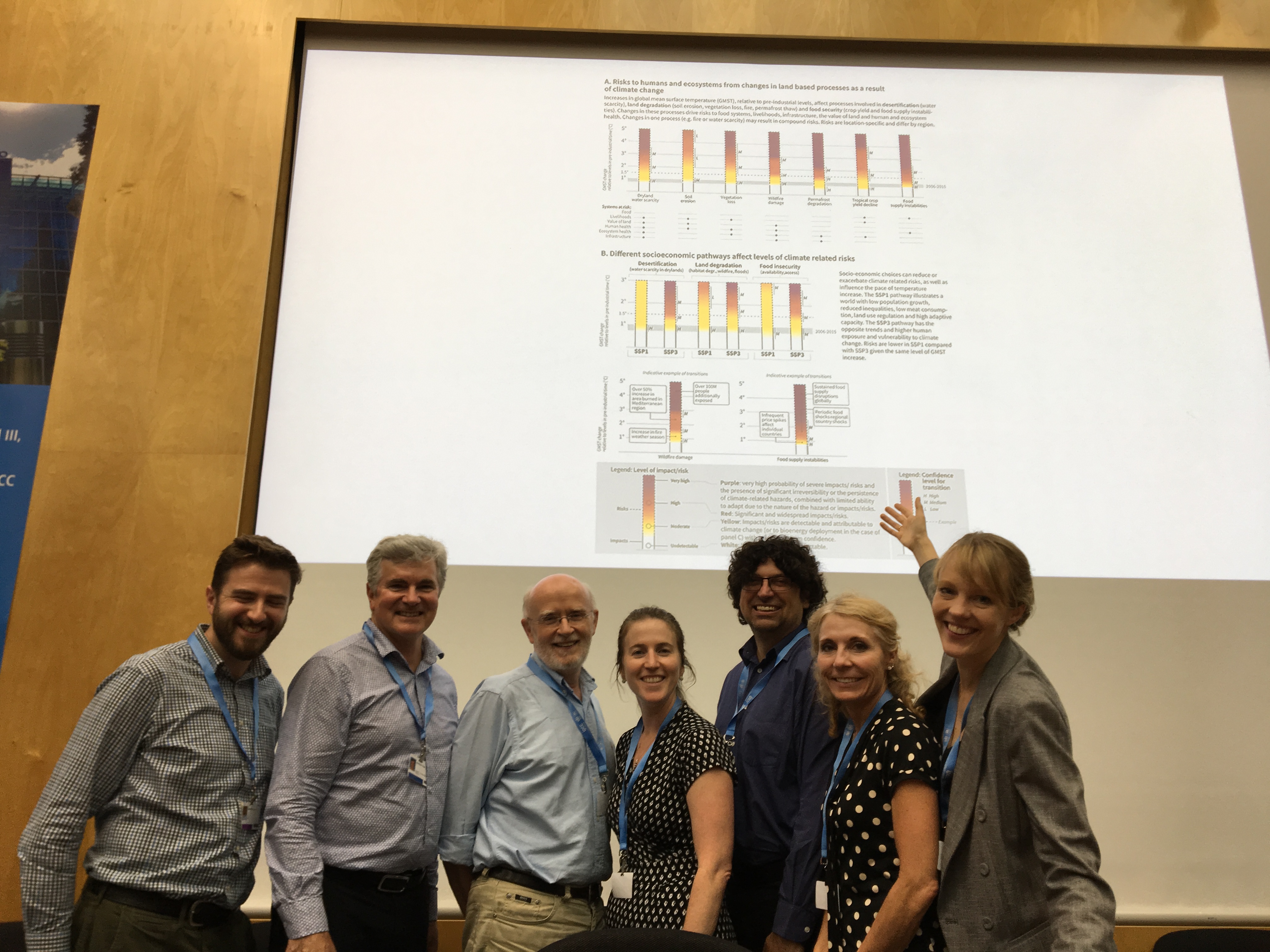 IPCC Scientists with one of the key figures they created for the report, indicating risks from climate change.

The IPCC Special Report on Land also shows that without action we face increasingly severe and complex risks. Globally, temperatures have already increased by nearly 1°C. At around 1.5°C, we face high risks from dryland water scarcity, fire, permafrost degradation and food system instability. This will be a world in which 50% more of the Mediterranean region could burn during the summer fire season. Food supply shocks could not only affect one country, but entire regions. We will face novel hazards such as tropical cyclones combined with extreme heat waves. People may survive the storm, only to find that, without air-conditioning due to blackouts, they will face heat-related death. An almost apocalyptic world!

But the report also articulates a different future, based on different models of socio-economic development. One socio-economic pathway, called SSP1, has fewer risks at higher temperatures. This world is characterised by high income and reduced inequality, effective land-use regulation, less resource intensive consumption, free trade and environmentally friendly technologies and lifestyles. Some scientists admitted to calling this “unicorn land” because it seems like a fairy tale. But such models show us that climate action is not only about energy choices but also includes decisions about how we interact with each other and our land.

These are not easy decisions, as I am personally aware. My parents and grandparents were refugees. Upon arriving in Canada, my father’s family lived as subsistence farmers. They planted trees, as retirement savings, hoping to one day sell them for timber. Now we have discovered that we are no longer allowed to cut or sell the trees because of their value for mitigation and conservation.

Governments need to limit harm to households from the transition to a green economy. The IPCC report outlines positive response options and possible policies, from encouraging research and development to strengthening agricultural extension services or better use of subsidies and taxes.

Sometimes all you need is a few people to lead the way to give courage to others to follow. During the negotiations in Geneva, several G7 countries wanted a sentence on multi-sector risks removed. A representative from a Small Island Developing State objected. I confirmed that this text on multi-sector risk was supported by science. Suddenly eight other countries agreed, “Keep the text. The world needs to know.”

In our apparent “post truth” age, the IPCC Special Report on Land process demonstrates how much scientific knowledge and factual evidence still count. World leaders will gather in New York on 23 September for the Climate Action Summit. There isn’t time to continue to negotiate what we “may” or “could” do. What we need now is “action”!

Zinta Zommers (Ontario & Wolfson 2003) is a Lead Author of the Special Report on Climate Change (Chapter 7: Risk Management and Decision Making). She has graduate degrees in Zoology and Development Studies from the University of Oxford. Zinta worked with United Nations’ Secretary-General’s Climate Change Support Team, during the negotiation of the Paris Agreement, with United Nations Environment and with the Food and Agriculture Organization. She has advised the United States’ Government and the Government of Sierra Leone, and has worked with vulnerable communities in over 10 countries across Africa and Asia.