While it isn’t Hogwarts, Antarctica has its own magic. Civilisation releases its grip, and you plunge into a new normal.

Having made the mistake of packing for seven weeks of camping on a deserted island in Antarctica without bringing my own music, snippets of the Hamilton soundtrack played on a loop in my head. This served as an aggravating backdrop for my contemplation of deep philosophical questions: will my penguins be there tomorrow? And, crucially, will my chocolate supply last until the end?

As the days passed, feeling far away from the rest of the world evolved into feeling far away from the rest of my life. Activities I had apparently engaged in in the very recent past, seemed utterly incomprehensible. I did not attempt to wrap my head around the concept of a black tie dinner. That life couldn’t have been further from mine, as I brushed my teeth on the beach, watching penguins cruise by, enveloped in the aroma of the guano I gave up trying to get out from under my fingernails.

Life on Nelson Island wasn’t ordered by social norms, it just happened. Beauty, pain, life and death, all mixed together. Something I initially found disconcerting was that death wasn’t hidden out of sight, but was present everywhere you looked from bones littering the stony beaches, to penguin corpses - varying in freshness - getting torn to pieces by skuas and giant petrels. Survival in Antarctica is balanced on a knife’s edge. This balance is made even more precarious by us. With the krill fishery developing in Antarctic waters, and the disproportionate impacts of climate change affecting the continent, the struggle for survival may soon have even fewer winners.

Along with three members of the British Antarctic Survey, I deployed GPS, depth sensors and video cameras on chinstrap penguins at colonies across the island. My research involves using machine learning clustering to identify penguin behaviours based on their GPS trajectories and dive profiles. The uncertainty in the future distribution and availability of Antarctic krill – chinstrap penguins’ only food source – have been exacerbated by anthropogenic impacts. Understanding the foraging trips breeding chinstrap penguins go on, including the long trips during egg incubation and short trips during chick rearing, will provide insight into the overlap in their habitat use with the krill fishery. This information could inform best practices to reduce direct competition for krill at their foraging sites.

The time finally came when my chocolate ran out. We were having breakfast after weeks of not seeing any other humans, when a helicopter quite unexpectedly landed in front of our tents. After inviting the humans we didn’t know in for tea, we found out they were Chilean scientists here to study penguins. Their lead scientist offered to bring us any supplies we needed with their helicopter, saying they would be ferrying people in and out anyway. This prompted an intense internal struggle, which ended with my concluding that if I asked a Chilean scientist to air-drop me chocolate by helicopter to an island in Antarctica, I would never live it down. So, I clenched my jaw and said nothing. Hours later their helicopter took off for the last time, and my last shred of hope took off with them. But just then, our field guide presented me with both a chocolate bar and sesame bars. Apparently, before he left, the Chilean scientist had re-iterated his offer, and parted with all the chocolate he had with him after hearing I had run out. This, more than any other experience I had, encapsulates the spirit of working in Antarctica.

This spirit is fostered by the Antarctic Treaty System. Ratified by all countries working on the continent, it priorities scientific inquiry and collaboration, banning militarisation and mineral resource extraction. The Antarctic Treaty System is a rare and remarkable accomplishment of international cooperation. Maintaining its integrity in the coming decades, and extending the treaty when it expires in 2048, will be vital for preserving the continent and its ecosystems, as well as the prioritisation of peace, science, and a spirit of alliance. 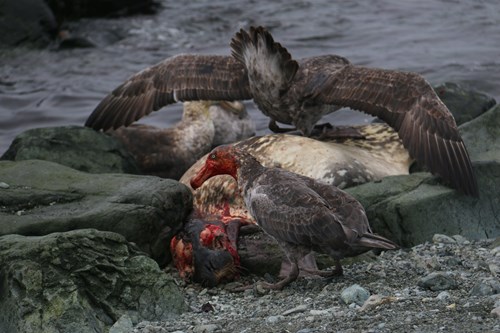 A giant petrel’s head is stained red with blood as it feasts on a Weddle seal. 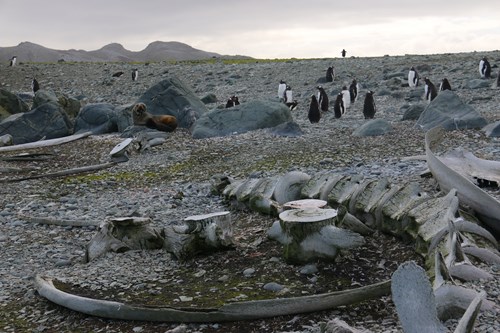 A fur seal and Gentoo penguins lounge by a whale skeleton. 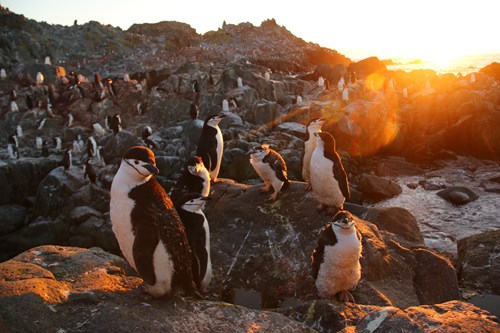 Chinstrap penguins loiter on the beach before returning to the colony.

Jessy Phillips (Ontario & Merton 2016) is part of the OxNav Group (Department of Zoology, Oxford University) and is interested in the behaviour of top marine predators in the Antarctic, focusing on penguins. She is also interested in using machine learning methods to better understand seabird behavior. You can look at more of Jessy's Antarctica wildlife photography at her Instagram page: @jessyaphillips.