Our mission is to build a vibrant community for Rhodes Scholars in and from China. This website is a platform for scholars across generations to engage with the latest community developments. The Association comprises Senior Scholars from the constituency, resident Scholars in Oxford, Scholars from other parts of the world who are currently living in China, and selectors for the Rhodes Scholarships for China.

BLM, Postcolonialism and the Invisibility of the Asian

Follow the Rhodes Scholarship for China on Wechat and Weibo 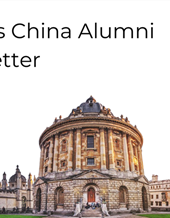 Read the first issue of the Alumni Newsletter for Rhodes China!

The Rhodes Scholarships for China was launched in March 2015. Four scholars are selected every year. The Rhodes Trust aims to double the number of Scholarships to China in 2025.

The profiles of selected scholars can be found here.

Do you know young people who might want to apply for the Rhodes Scholarship?

Know the selection committee for the Scholarships

The Association is managed by an organising committee consisting of national secretaries and some senior scholars.

If you are a Chinese Rhodes Scholar or a Scholar living in China and would like to get involved or find out more, please free free to email Naying Ren (China & Linacre 2016) at rennaying@gmail.com.